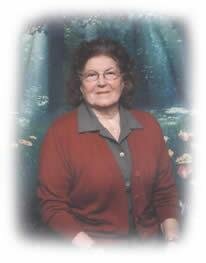 PHYLLIS ABEL March 14, 1924 - April 24, 2009 Phyllis Wetherill was born March 14th, 1924 in Lone Prairie, B.C. She couldn’t wait to start exploring the world and was born in the sleigh on route to Grandma’s house. Phyllis was the fifth child and the second daughter born to May and Bert Wetherill. Her mother taught her correspondence until the school in Lone Prairie was built in 1932. She moved with the family to Groundbirch in 1936. She continued her schooling in the Tuscolla Mt. School in Groundbirch. Phyllis had a love for horses which she has passed down to her kids, grandkids, and great grandkids. She loved music and could play a variety of instruments including the guitar, accordion, fiddle, mandolin and the organ. She sang and yodelled for her family. At the age of 16 she went to work as a clerk first at the Groundbirch Store and then at the Dawson Creek Co-op. She met the love of her life, Herman Henry Abel, at a local dance. They married on October 10, 1943. They bought their first house together in Dawson Creek on 104th Ave. Shortly after the birth of their first daughter they moved to a quarter section in Groundbirch, next to Phyllis’ parents. Phyllis was a nurturing care giver. She had a special bond with each and every one of her children but it didn’t stop there. She babysat for friends and family. She believed babies were to be loved and pampered. Her kids’ friends considered her their second Mom as she accepted them into her home as one of the family. Phyllis was a self taught seamstress. She could sew the most beautiful wedding gown, frilly dress, Halloween costume - right down to repairing binder canvases. She loved to knit siwash sweaters, baby layettes, aphgans and lace doilies. When her youngest daughter Dannette was in school Phyllis went back to work. Phyllis worked at Park Apiaries, the Groundbirch Store and then she became a homemaker. She retired in 1983. She continued to give herself to others. Phyllis’ eye sight started to fail and she was declared legally blind at age 75. Phyllis lost her husband and partner of 61 years in January of ’05. She stayed at the farm for as long as she could, then in January of 06 she moved into Southview Apts. in Dawson Creek. Later, she moved into Rotary Manor on March 23, 2009. Phyllis passed away peacefully April 24, 2009. Phyllis was predeceased by her parents, May & Bert Wetherill, her brothers, Kenneth, Warton, Johnny, Douglas and Ronald Wetherill and sister Elsie Linsley and husband Herm Abel. She is survived by her daughters Dawn Leer (Cliff Faulkner), Valerie Truax (Garnet), Amber Fullerton, Terry Onychuk (Greg), Shellie Graff (Russell), Shannon Howes (Wayne), Dannette Sluggett (Sheldon) and son Kenneth Abel (Dawn), 23 grandchildren and 24 great grandchildren. A memorial service was held on May 4, 2009 at the Bergeron Funeral Chapel, officiated by Peggy Bergeron. Memorial arrangements were entrusted to Bergeron Funeral Services & Crematorium Ltd. Dawson Creek, British Columbia.
Share Your Memory of
PHYLLIS
Upload Your Memory View All Memories
Be the first to upload a memory!