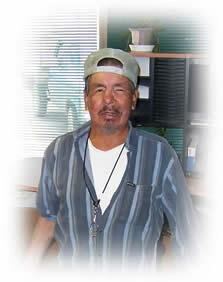 Dale Roland Frederick 1920-2009 Dale Roland Frederick, resident of Groundbirch, British Columbia, passed away April 20, 2009 in the Chetwynd Hospital Care Home, Chetwynd, British Columbia at the age of 88 years. A funeral service was held Monday, April 27, 2009 from Bergeron Funeral Chapel, Dawson Creek. Pastor Lee Stephenson officiating. Interment followed in the Groundbirch Mountain View Cemetery. Eulogy present by Brandi Sather. (notes from Marilynn---Dale’s niece) Dale Roland Frederick was born the third son of Walter and Effie Frederick, September 5, 1920, in Worth County Missouri. The home that he was born into was loving but very poor. There was the oldest son Clifford Walter, some 15 years older, and second son Chandos died at 12 years of age (1926) when Dale was six years old. Dale’s parents attended the Church of Christ in Isadora, Missouri every Sunday. All the children were baptized there and had many happy memories of that church. Marilynn recalls that "as a child she was impressed with Uncle Dale’s hearty booming voice. And his singing voice—the popular songs of the middle "40’s” she learned from him. He graduated from Grant City High School in 1938. Dale married Lorene Carden in 1941. They had 3 children; twins Carl and Carole born in 1942 and Bob born in 1943. (notes from Hettie) Dale immigrated to Canada in June 1969. His first choice was to live in Chetwynd, British Columbia, then he bought land in and moved to the Groundbirch area. Dale and Hettie Madden met about 1970 and were married November 1972 in Regina Sasktachewan. In 1974 and for years that followed Dale did Contract Logging and clearing wilderness to farm land and ranch. The work was not easy, almost primitive compared to the way it’s done now. He was thankful to have good hired help that toughed it out with him for many years. He approached each day with a positive attitude and nothing seemed too complicated or discouraged him. He loved fishing trips and in hopes he could encourage the grandkids to go with him. He enjoyed the old western movies on the road or at home on TV. Come mealtime he always said grace and the grandkids remember that well. As his great nephew (Phil) put in words "Uncle Dale’s adventuring free spirit and quest for the open road took him across North America seeing things we may never get to see”. Come "spring break” Dale and Hettie would head out and distance didn’t matter with the R.V. Dale is survived by his loving wife, Hettie, his children: Carl (Sue) Frederick, Carole (Ron) Powell, Bob (Cathy) Frederick; step-son Dennis (Annie) Madden; grandchildren: Christopher Frederick, Rebecca Frederick, Roland Frederick (Lara Clark), Jodi (Doug) Fleming, Bill (Jennifer) Powell, Kirk (Michelle) Powell, Brad (Bobbie) Powell, Rick (Julie) Frederick, Jeannette (Mark) Neil, Brandi (Trevor) Sather, Bryce Madden (Diane Dahl), Brette Madden, Duane (Karina) Postles, Tracy (Mike) Grams; nieces Marilynn and Bonnie and nephew John.
Share Your Memory of
Dale
Upload Your Memory View All Memories
Be the first to upload a memory!